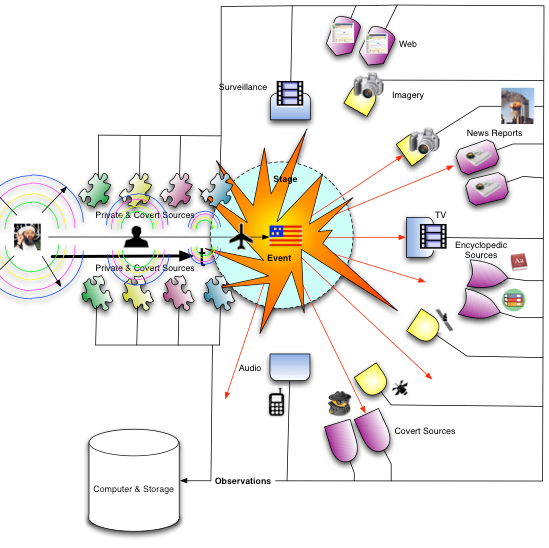 Despite its intelligence software roots, as stated previously (here and here), Mitopia’s base Carmot ontology evolved primarily out of pragmatic and implementation considerations regarding the creation of a data-flow based system, and the necessity to efficiently represent and organize data in a generalized form that could be discovered and leveraged in a reusable manner over data flows, by individual and unconnected islands of computation.  By training, I am a physicist, thus, given my ignorance of ontologies at the time (1993), when faced with the question of how to organize and represent information about anything in existence for the purposes of understanding world events, there was a natural tendency to gravitate towards thinking of things in terms of the scientific method.  The scientific method, as everyone knows, can be summarized as follows:

This post is part 3 of a sequence.  To get to the start click here.
Essentially the scientific method is the only process/tool that has ever succeeded in explaining how the world works and what kinds of interactions can occur between things in the world, in a manner that gives any predictive power to allow us to reason what might be the results of some new situation in the absence of experimental results to tell us.  Everything we take for granted in the modern world was developed by this process, and so it seemed clear to me at the time that any intelligence software or system for organizing data for the purposes of ‘understanding’, must also be based on this premise.  This is clearly contrary to the approach taken in any of the semantic ontologies described earlier, and yet it seems such an obvious approach, it is hard to understand why this is the case.  Perhaps the difference reflects the fundamentally different approaches between science and philosophy.  Since philosophy has spawned all other ontologies, it is perhaps not surprising that the scientific method does not feature in any fundamental way in conventional ontologies.
If we wish to understand all that goes on in the world, the worst-case requirements we can imagine would be those for an intelligence agency striving to monitor world events; we should design our ontology to handle this application.

As mentioned above, we can address this issue quite simply by recognizing that thinking entities (the types of actors we are most interested in) take actions before an event they are planning to participate in, in order to get ready for that participation.  Thus we must redesign our experiment slightly to gather information on a continuous basis up-stream in the time line as shown in the figure below.

These up-stream sensors tend to be private or covert feeds rather than open source and thus they are things like passport and travel data, financial transactions, licenses and police reports, communications intercepts, HUMINT, etc.  The nature of these feeds in general is that they are more reliable and contain data with high semantic content that can be connected via link analysis to other encyclopedic data.  This is important since these upstream sources must be sensitive to far lower ‘signal levels’ than those typically associated with an actual publicly perceptible event which includes media attention.  These sensors are examining the ‘ripples’ in the pond and looking for correlations between them whereas the post-event sensors are examining the actual splash.  It is the degree to which a system is able correlate between the various types of low level ripples that precede an event in order to recognize a significant pattern of intent, that determines how well the system itself functions in a predictive capacity.
Unfortunately, most of the effort and expenditure exerted by intelligence agencies today is focussed on gathering more different types of data, with higher accuracy, while little if any progress is made on the far more important intelligence software problem of seeking coherence of intent in the ripples from these up-stream feeds.  We can now read license plates from space, but we still rarely know where to point such amazing sources before the event.
The mistake is to treat the intelligence software problem in the same way as one conventionally treats almost every other real world problem.  To improve understanding post-event (right-of-bang in military parlance), all one really needs is more data with higher accuracy, and so it is easy to fall into the trap of thinking that this will also solve the pre-event (left-of-bang) issue, especially when demonstrations of new technology to potential purchasers are given using post-event historical data in order to clarify what difference the technology might have made in a known historical event. When seeking coherence and correlation in low intensity pre-event data streams, the issue is primarily one of removing the overwhelming amount of noise or insignificant data, from the tiny amount of significant data that may be mixed into the stream.  In any real world scenario looking for correlation up stream, the noise is likely to outweigh the signal by many orders of magnitude, and so our analysis techniques must be able to operate in this setting.  Only by organizing and interconnecting data in a rigorous ontological manner that is firmly based on an upper level ontology tied to the scientific method, is it plausible that the highly indirect series of connections that make up significance in the presence of overwhelming noise, can be discovered and extracted in a reliable manner.
Our approach to ontology must focus first on assembling the content and connections implied in the stream of observations and meta-data that make up our limited picture of the world.  Much of this information is extracted by non-linguistic techniques from meta-data or by inter-source combination.
Only once this firm representation of the variety of observations and sources is in place should we consider refinement of our ontology based on linguistic and/or semantic processing of individual textual observations to understand the intent of human speech.  Conventional systems cannot unify multiple sources and thus are restricted to attempting understanding based on semantic analysis of text, but this misses virtually all of the most reliable and telling connections that come from a fully contiguous ontological approach (see discussion here).  This then is the philosophical reason behind the unique organization of Mitopia’s base ontology.

Fortunately all the thinking above took place in the early 90’s, long before I became aware of the existence of such things as ontologies.  It was not until December 2,000 during a presentation to a US intelligence agency that I learned the meaning of the word ontology, and subsequently discovered the approach others were taking to using ontologies within computers.  By that time Mitopia’s path had been set long ago, and comparison to other ontological approaches at the time made it clear, in my mind at least, that there was every reason continue to ignore conventional wisdom.  This decision has I think been born out by the relative lack of progress in the semantic ontology field, notwithstanding the huge efforts made.

After that meeting in 2,000 I started to use the word ontology to try to help listeners understand the Mitopia® approach.  In retrospect, it seems I traded off the utility of a known word ‘ontology’ for the burden of distinguishing my use of that word from the semantic/linguistic version implied by all others. This post, and those that led up to it, is just the latest example of this reality.