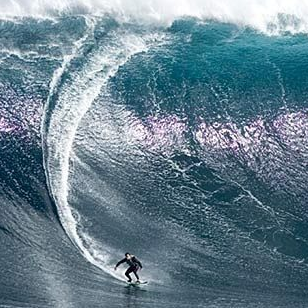 To a large extent, the decision to specify a data flow (also see here and here) based Mitopia® system as opposed to a control-flow based one was driven by a common higher level “adaptability” goal that also led to identifying and addressing the “Software Bermuda Triangle” issue (see earlier post here).  In particular, for complex systems, such as those designed for multimedia intelligence and knowledge management applications, there is a fundamental problem with current ‘control flow’ based design methods that renders them totally unsuited for these kinds of systems.  Once the purpose of a system is broadened to acquisition of unstructured, non-tagged, time-variant, multimedia information (much of which is designed specifically to prevent easy capture and normalization by non-recipient systems), a totally different approach is required.  In this arena, many entrenched notions of information science and database methodology must be discarded to permit the problem to be addressed.  We will call systems that attempt to address this level of problem ‘Unconstrained Systems’ (UCS).  A UCS is one in which the source(s) of data have no explicit or implicit knowledge of, or interest in, facilitating the capture and subsequent processing of that data by the system.  To summarize the principal issues that lead one to seek a new paradigm to address unconstrained systems, they are as follows: 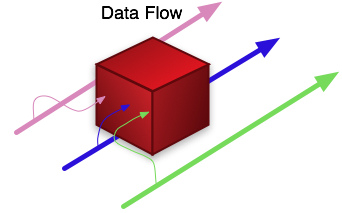 We cannot in general predict what algorithms or approaches are appropriate to solving the problem of ‘understanding the world’.  The problem is simply too complex.  Once again we are forced away from our conventional approach of defining processing and interface requirements, and then breaking down the problem into successively smaller and smaller sub-problems.  Again, it appears that this uncertainly forces us away from any idea of a control-based system and into a model where we must create a substrate through which data can flow and within which localized areas of control flow can be triggered by the presence of certain data.  The only practical approach to addressing such a system is to focus on the requirements and design of the substrate and trust that by facilitating the easy incorporation of new plug-in control flow based ‘widgets’ and their interface to data flowing through the data-flow based substrate, it will be possible for those using the system to develop and ‘evolve’ it towards their needs.  In essence, the users, knowingly or otherwise, must teach the system how they do what they do as a side effect of expressing their needs to it.  Experience shows that any more direct attempt to extract knowledge from users or analysts to achieve computability, is difficult, imprecise, and in the end contradictory and unworkable.  No two analysts will agree completely on the meaning of a set of data, nor will they concur on the correct approach to extracting meaning from data in the first place.  Because all such perspectives and techniques may have merit, the system must allow all to co-exist side by side, and to contribute, through a formalized substrate and protocol, to the meta-analysis that is the eventual system output.  It is illustrative to note that the only successful example of a truly massive software environment is the Internet itself.  This success was achieved by defining a rigid set of protocols (IP, HTML etc.) and then allowing Darwinian-like and unplanned development of autonomous but compliant systems to develop on top of the substrate.  A similar approach is required in the design of unconstrained systems.   Loosely coupled data-flow based approaches facilitate this. 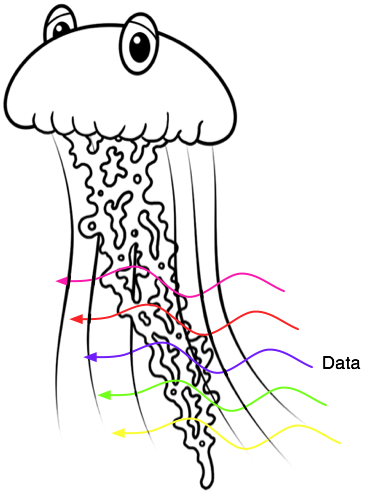 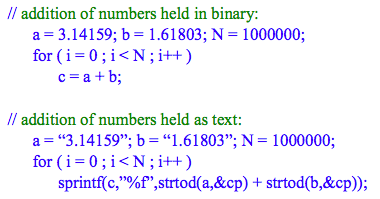 The second code snippet takes 275 times longer than the first to execute, so we can anticipate a similar performance problem will strike any semantic ontology-based system when we attempt to scale it.  In the semantic ontology world, the intermediate textual form is XML.  Slapping a text-based semantic ontology onto a system that represents and manipulates data at the binary level (i.e., all systems!) is unlikely to scale in a data-flow environment.  Instead such a system would be forced to accomplish things using a slower ‘batch’ strategy, which is in fact exactly what we see out there now.  Indeed the quote below is taken from a DrDobbs article on the problem of using XML as a textual intermediate for data exchange:

As a result of thinking about this issue in the early 90’s, Mitopia’s unique memory model as embodied most visibly in the “Type Collections” technology eventually emerged.  The basic technique was to discourage the use of pointers and replace them with ‘relative’ references so that all data in a collection, including all the cross references, could be contained and manipulated within a single variable sized memory allocation using the “type collections” abstraction.  Nodes within such a collection have associated types as discovered and defined by the type manager.  This allows the entire binary collection to be passed across data flows (local or remote) without any modification whatsoever, while still being completely functional at the destination thereby eliminating the performance bottleneck.
We will discuss this concept further in later posts.