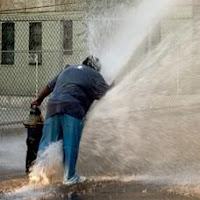 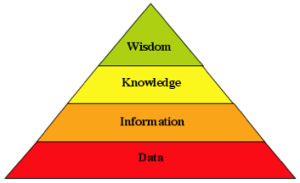 This post on information overload is part 3 of a sequence.  To get to the start click here.

More and more our lives and interactions occur in the digital world, not the analog world for which our brain evolved.  We all have digital doppelgängers that are comprised of our interactions and past history in the digital world.  In a very real sense as time goes on, the balance of importance between who we are in an analog sense, and who our digital doppelgänger is, shifts steadily in favor of the digital realm.  More and more of our important transactions shift to the digital domain with each passing year, yet right now we have few systems to help us implement our doppelgänger, instead we must be directly responsible for our digital interactions without anything but the most primitive of Information Level (IL) systems to mediate.

In the analog world relevance drops off exponentially with distance from the observer so that a tiger a half mile away can safely be considered less important than one 10 feet away.  Our brains perform miracles to automatically filter out what is unimportant and to focus our attention on just what must be processed ‘now’.  The brain accomplishes this feat largely by taking advantage of the real-world exponential relevance fall off.  This processing is necessary because at the core, we have in our head something behind a 150 baud modem that makes all the complicated Knowledge Level (KL) and Wisdom Level (WL) decisions, and there is no way it can handle all the Data Level (DL) or even IL details.  We call this thing that resides behind the 150 baud modem our consciousness or mind.
Because of the mediocre throughput of our mind, powerful though it may be, virtually our entire nervous system is devoted to the business of reducing the overwhelming amount of data impacting our senses into a just a single prioritized KL mental ‘thread’, backed up by a small and simplified DL/IL ‘observation’ stream.
When necessary, the brain wiring can cause outside events to re-prioritize the modem stream to access the ‘mind’ and determine if actions or a response is necessary.  For example, consider the workings of the human eye.  Just a small spot in the center of our eye contains the rods and cones necessary to examine fine detail (the fovea) and yet the entire surface of our retina has an image projected on it that we refer to as our ‘peripheral vision’.  What if something important happens in the visual field, but our gaze (and thus our fovea) is pointed elsewhere?  We cannot involve the mind in every decision to switch gaze to check it out.  Not only would the mind be overwhelmed with irrelevant activity, but by shifting focus continuously we would become disoriented, confused, and probably look crazy to boot.
The retinal neural pathways deal with this issue by simply leveraging the fact that things that don’t move are less important than things that do.  So, if something doesn’t move in our peripheral vision, we don’t burden the mind with being aware of it.  If it moves, then we involve the mind in shifting focus and checking it out.  If it is subsequently determined to be unimportant, and focus shifts elsewhere, later similar moves by the object also avoid involving the mind directly.  Thus if we see a line of trees ahead and a tiger moves within it, our focus immediately and involuntarily switches to it.  This too is why a tiger has stripes to blend into the shadows, and tends to wait un-moving until its prey is within range.  Similar filtering strategies are followed by all our senses, and are the basic underpinnings required to create the relative quiet necessary for a ‘mind’ to evolve in the first place, and for it to be effective.  So our mind first becomes aware of such an object in our peripheral vision through a message containing something like “large anomalously colored object just moved against fixed background”.  The mind determines that this may be higher priority than the current ‘thread’ and commands the senses to focus on the object.  What happens from there on depends on the quality of the DL stream sent by the senses to back up the assertion (poor eyesight would select against living near tigers) and on the quality of the ‘mind’ behind the modem.

The important thing to realize is that the initial message is abstract and has an IL payload,  with a possible KL tag (if the triggering phenomenon has been previously analyzed by the mind and tagged).  The filtering process requires a computational substrate that is awash in the entire unfiltered torrent of data, and yet only fully recognizes, retrieves, and processes, a tiny fraction that may be relevant, and then transforms it to tagged IL messages that are passed up the cognitive hierarchy.  This is required in order to compete for attention from the KL/WL mind-modem.  Only when the mind-modem’s full attention is gained is there the possibility of passing high fidelity DL streams for detailed analysis and pattern recognition.  Once attention is lost, it becomes harder with each successive attempt to get it back for the same root cause unless a KL tag or connection has already been made.  Such is the nature of the mind, it is the only way we find the tranquility that allows us to ‘think’ at all.
Like the brain in general, our ‘mind’ must refine data to a higher level to operate, the difference is that the mind operates largely on (possibly tagged) IL data packets (as opposed to the DL analog world inputs).  These packets must be transformed into decisions that meet the goals of the individual involved, a process that operates at the knowledge and wisdom level (at least for individuals that survive for long!).  Here again the mind must reformulate the fundamental way information is held to reduce its volume while increasing connectedness.  The mind does this by the use of internal ontological models.
The process by which a child grows up and experiences the world is one in which that child builds mental models (or ontologies) of how things in the world work and interrelate, and refines these models to the point where they become powerful enough to allow that person to make informed and weighted decisions on what actions to take in any given situation and what the possible consequences might be (by modeling the ontologies of others).  It is these ontologies that allow us to understand new and unfamiliar information by converting it to parallels or transient metaphors based on existing internal models and the connections between them.  It is our internal ‘ontologies’ that drive us to seek particular answers, but our spoken language and other communication techniques require us to translate these into the taxonomy of others, who cannot possibly know or understand our internal models, for the purposes of communicating.  Human beings, the consummate communicators, do this so well that most of us are completely unaware of our internal ontology unless closely questioned by experts, a thing that rarely happens unless we visit a psychiatrist or are suspected of a crime.  Exposing our ontology in communication leads to conflict and we are all loath to do so.
Cognitively speaking the mental sequence following receipt of the “large anomalously colored object just moved against fixed background” message and the DL stream to back it up might go something like the following:
Object is large (by comparison with known tree height), say half the height of a man.  Object has black/orange stripes and is clearly an animal (i.e., movement is incompatible with wind motion).  Tigers have black/orange stripes.  Tigers live near here and are extremely dangerous.  Decision:take evasive action.
With a less developed and interconnected ontology, the process might go more like the following:

Object is large … say half the height of a man.  Object has black/orange stripes and is clearly an animal…  Cannot identify object (individual has never heard of tigers).  Decision:move closer to get a better look.  Upon closer inspection object has sharp claws and is cat-like therefore it may be a predator.  Decision:take evasive action right now!
A yet less developed internal ontology might lead to the following outcome:

Object is large … say half the height of a man.  Object has black/orange stripes and is clearly an animal …  Cannot identify object …  Decision:move closer to get a better look.  Object has beautiful fur and is watching me quietly, perhaps it wants to be friends.  Decision: move closer still and pat it…data stream ends, no further messages logged!
So it is through the gradual refinement of data first to the information level in the subconscious and then, through ontologies, to the knowledge level in the mind that we are able to model, predict, and act wisely upon the abundance of data level streams that impinge upon our senses.  This refinement sequence starts with leveraging the relevance fall-off that characterizes the analog world, and thereafter is based on the knowledge pyramid.  It is the only process/system we know of that can perform these feats. 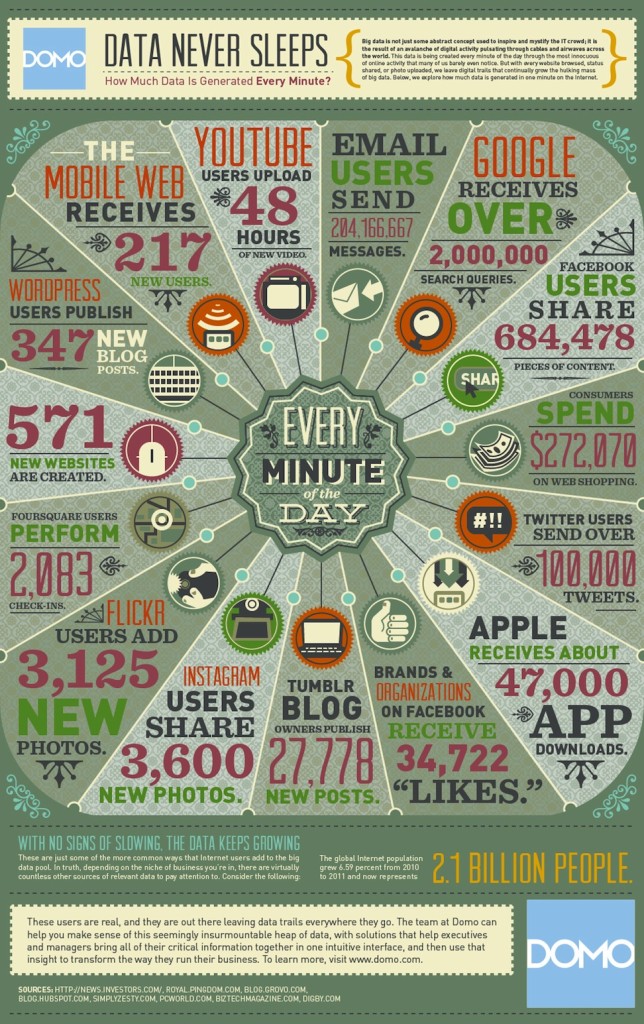 In the digital domain the situation is quite different.  Firstly there is no exponential relevance fall-off with distance and to a lesser degree with time.  We can be ‘hacked’ or e-mailed from the other side of the world as easily as we can from next door.  Secondly, while digital data mounts up at an ever accelerating rate (double-click on image for details), and it may all be on-line through DL systems, there is no universally applicable methodology to transition from DL streams to IL messages.  Digital IL systems are commonplace but occupy limited niches and are stove-piped.  Finally, we have no systems for which the fundamental representation is itself at the knowledge level, our KL systems (such as they are) are facades grafted onto IL substrates.
Without true KL systems, it is unclear how our technology can meaningfully take any responsibility for our digital alter-ego, our doppelgänger.   This in turn implies that we must use our analog mind to transform DL data streams up through the knowledge pyramid to make decisions.  Because the potentially relevant DL stream is a world-wide tsunami of data, which we can filter only through our 150-baud conscious mind (because we must read it), this is impossible as none of the filtering tricks build into our neural pathways is of any help to us.

We are drowning in data that we have no highways to route to, let alone intelligently process through, our minds; and the situation gets worse with every passing year.  We made, and continue to make this choice without any real thought as to how we will sustain our trajectory.  As a species we have created a mixed digital/analog world, and moved most of our doings to the digital domain while we as individuals (or corporations, or even governments) lack any credible methodology to keep track of what is going on in there.  In reality our doppelgänger is out of control, we each leave a digital wake behind us, but we see only dimly what lies ahead, and the data clouds that obscure our vision get ever larger and darker.