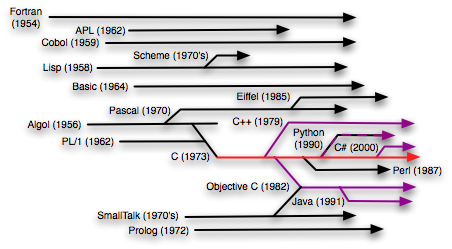 Throughout the Mitopia® development, the question of why don’t we use C++ (or more recently Objective-C) instead of straight C has emerged again and again, particularly among younger members of the development team.  At the outset (back around 1991), the decision was made to use object oriented programming (OOP) techniques and implement all code in C++, we felt that for such a huge undertaking, the claimed increase in coding efficiency more than justified itself,  so that was what happened for a number of years.  It turned out to be an unmitigated disaster.  In the end, all C++ code had to be re-written from scratch in C.  The reasons why this was so, are instructive for anyone embarking on a really large and dynamic software project, and are the subject of my post today.  We will characterize such a project as one with a large programming team, and where requirements must evolve with changes in the outside world.  Given the increasing rate of change in the digital world, this set includes almost all non-trivial, non-isolated development efforts.
NOTES:
The diagram above shows a simplified family tree and time line of the major ‘true’ programming languages where the line lengths for each language indicate the period over which the language remained in significant use.   For a more exhaustive language tree, see here.  In an earlier post (here) we introduced the TIOBE programming community index (www.tiobe.com) and discussed how C remains the most popular language even today, 40 years after its inception.  In  contrast, trends for C’s older OOP derivatives are downwards.   Over the long term the situation appears as shown in the table below.

C was developed between 1969-73 at Bell Labs by Thompson and Ritchie.  It is the most widely used programming language, prized for its efficiency and for this and other reasons is almost exclusively the language in which system software is written.  Another consequence of C’s wide acceptance is that compilers, libraries, and virtual machines for other high level languages are most often written in C.  C is essentially a low level language, it directly provides no object-oriented features leaving all such refinements as design decisions up to the developer.  C is the language on which Unix is based, and thus in a very real sense is the language on which the Internet itself is built.  There is probably more ‘active’ C code out there than anything else, and the gap is getting wider.  Other languages have peaked briefly as they become the ‘fad’, but in the end it appears they always fade back into the noise.  The reasons for C’s enduring popularity are I believe clear, if one thinks about it with an open mind.

Here we see that LOC/FP for object-oriented languages is taken to be roughly one quarter of that required by straight C.  Why is this so?  The standard answer of course is that OOP relies heavily on inheritance; that is you can acquire complex functionality concisely by inheriting it from one or more ancestral classes.  This is in contrast to the bottom up layered approach that is exhibited by component based programming models.   This has been the conventional wisdom for quite some time.  Beyond the realm of trivial programs, it is, and always has been, wrong. 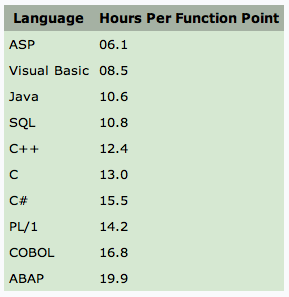 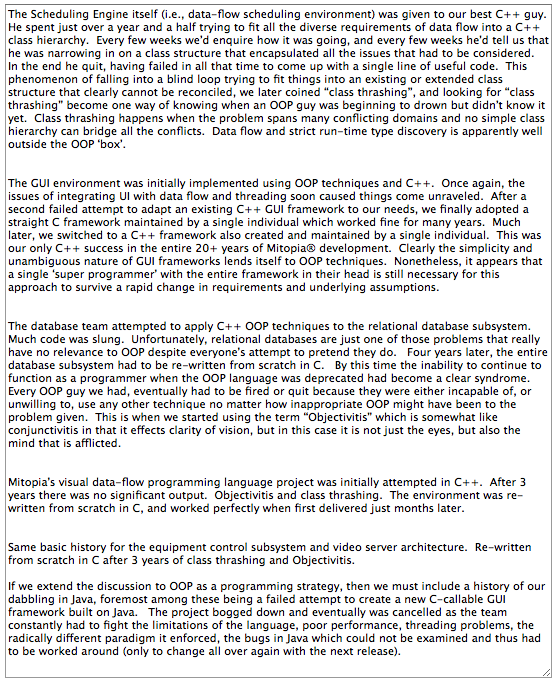 To summarize, my experience has been that OOP techniques when applied to problems that they are unsuited to, are almost universally a disaster.  OOP works well only in problem spaces that are naturally constrained, which are not subject to pragmatic considerations imposed by the outside world and existing environment, do not conflict with the paradigm restrictions of the OOP language chosen, do not have to deal with rapid change, and most importantly of all, it appears that OOP only works when a single individual is involved and can keep the whole thing in his/her head.  The problem gets worse as the project gets larger and more complex.
Why is this so?  Consider the pyramid diagram I gave earlier.   Both pyramids rest on the underlying substrate, and both are stable as long as nothing changes.  But of course things always change!  Imagine if you will a tectonic shudder rippling through the substrate like someone pulling out a rug from under you.  Such a shudder could be a change in the environment but most often it is a change in the assumptions that govern what the program is attempting to do.  Now what happens?  In the right-side up pyramid, not much, perhaps a few blocks in the lower regions of the pyramid get broken and need repairs but programmers in the “box” are unlikely to even be aware of the change.  Over twenty years of development, Mitopia underwent a number of massive tectonic changes.  Yet over the years, most tectonic shudders never even rippled up to a level where anyone other than the person(s) repairing the base blocks was aware of the earthquake.  Assuming good abstraction layers, little extends into the box, all repairs are to isolated and independent lower level abstractions.  The result was that life continued for most ‘box’ developers pretty much unchanged.
Now lets examine what happens in the inverted OOP pyramid case?  Well, the assumption change generally impacts as a need to change the class hierarchy, and of course this ripples throughout the entire code base including those in the “box” who have made all their decisions based on the class hierarchy “walls” that were so comforting.  To keep the pyramid from topping over (since it rests on its point), its creator must work frantically to keep it ‘balanced’, and must then help all the poor box dwellers to update their code to handle whatever was necessary to maintain that balance.  New ‘box’ classes, new assumptions.  For any large highly connected system exposed to the real world, these assumption changes can hit at an alarming rate, and unless the single creator of the original framework/pyramid is around and still capable of re-balancing it, the whole thing falls in pieces on the ground.  If there is a team involved in the project, the chances of balancing are apparently reduced proportional to the number of people involved.  Since Mitopia® was from the outset predicated on the assumption of continuous change, clearly we should not allow inverted pyramids to be part of the code base.  Worse than this, even if the one super programmer is still involved, what if they get hit by a bus, and anyway once things get really large, even they cannot remember all the subtle adjustments made over the years to achieve balance, and so in the act of re-balancing they inevitably break stuff in the box based on prior class assumptions.
When we eventually moved to the C++ GUI framework, the development team became very familiar with the impacts of re-balancing in the pyramid above our heads.  We got accustomed to bracing ourselves each time a major new build appeared, and the development version generally took weeks to re-stabilize.  Of course since the developer was a super-programmer, everything was rapidly fixed once the culprit was isolated and proven.
The lack of any classes or inheritance and the use of run-time type discovery and auto-generation of both the GUI and the ‘database’ from the ontology became even more important as Mitopia’s mechanism to decouple the fallout from ‘above’, but just as importantly tectonic shudders from below, from everyday life in the “box”. 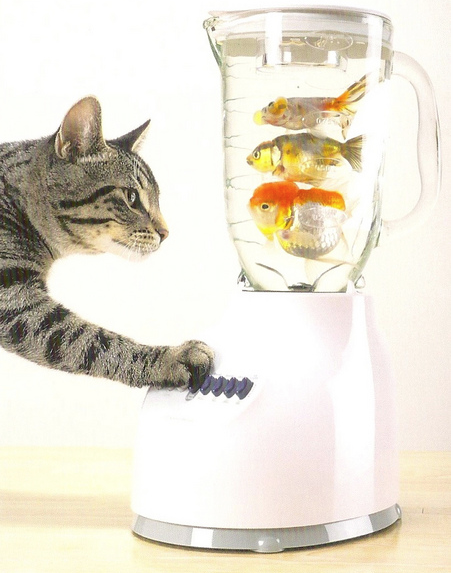 What then is the problem with OOP other than being an addictive drug? Basically it is inheritance.  It is inheritance that gives OOP its expressive power, but it is also inheritance that is its greatest fault, for it is inheritance that produces these solid vertical walls that so reassuringly protrude into the “box”.  But when the assumptions that govern the placement of these walls are challenged or changed, as they inevitably will be, the resultant effect on the “box dwellers” is much like being in a blender as walls whiz back and forth sometimes crushing the occupants of a room that has suddenly disappeared.
Knowing, though seldom verbalizing, this ‘blending’ problem, causes most good OOP programmers to get stuck in the “class thrashing” loop as they try to find the ultimate class breakdown that will never change and thus never ‘blend’ their “box dwellers”.  When the problem space does not lend itself to this approach, as it often doesn’t, we have the all to common result of producing virtually nothing useful despite huge efforts.
No such effect occurs when abstraction is handled in a bottom up, horizontally layered, component-based approach.  From the “box dweller” perspective, one simply sees new bricks and building blocks appear, but the house room plan does not re-arrange itself without permission.
To solve a problem in an OOP language the programmer must choose to ‘become’ part of one or more existing classes, subsuming any personal conceptualization into that of the class library.  Program structure is ordained from above.
To solve a problem in a component-based abstraction, the programmer chooses and assembles components from the available abstractions, but remains free to conceptualize the problem in any way.  While the components may influence the solution approach, they are generally subordinate to the code of the problem solver.
What in my opinion is the greatest feature of OOP?  It is the ‘tagged union’ construct used by a ‘class’ to handle inheritance and polymorphism.  Regrettably however, this trick is hidden within the ‘implementation’ and wholly unknown and unappreciated by most OOP programmers who think it some magical feature conferred by the class concept.  The construct should instead be exposed for overt and creative use within the ‘box’.  Were this to be done, many might see OOP languages for the thin facade that they really are.  I will deal with this concept in later posts (see here). 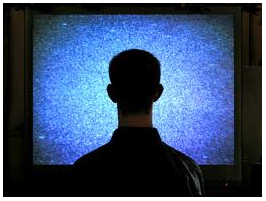 If your goal is to create something radically new,  don’t waste time peering enviously into other people’s boxes, they will drift where they will, you need to chart your own course without outside influence.  New language fads are among the most dangerous boxes to peer into.  In all things, you should look at what others have done only AFTER you have implemented your own initial solution.  If you look before, you will likely fall into the canyon of their bad decisions.  If you look afterwards, you will appreciate why they made their choices and you may actually learn something.  More likely it has been my experience that you will disagree with the fundamental approach and chart a wholly different course.   The needs and paths of the shoal are not those of an innovator.